In Our Toolkit: BBC News BotBuilder

Scripting chatbots is hard. Here's how we're making it easier for BBC journalists.

In the past six months BBC News has piloted a series of in-article chatbots to help casual news readers catch up on long-running news stories. From the general election to the Royal Wedding, the bots have answered questions about the biggest stories of the year.

The bots have proved popular with audiences and journalists are eager to experiment with the format — but the process of building bots can be complex. Our first experiments creating conversations were painful for journalists, as they struggled to keep track of the all the different branches of the interaction.

To solve this problem, we created the BBC News BotBuilder tool. The BotBuilder gives journalists the ability to easily convert long explainer articles into an interactive conversation or create new content from scratch. It automatically generates a database of questions and answers from an inputted article URL, saving journalists the headache of repurposing their content from scratch. Alternatively, journalists who want to create bespoke content can input blocks of text and customise the options that are presented at the end of each interaction. 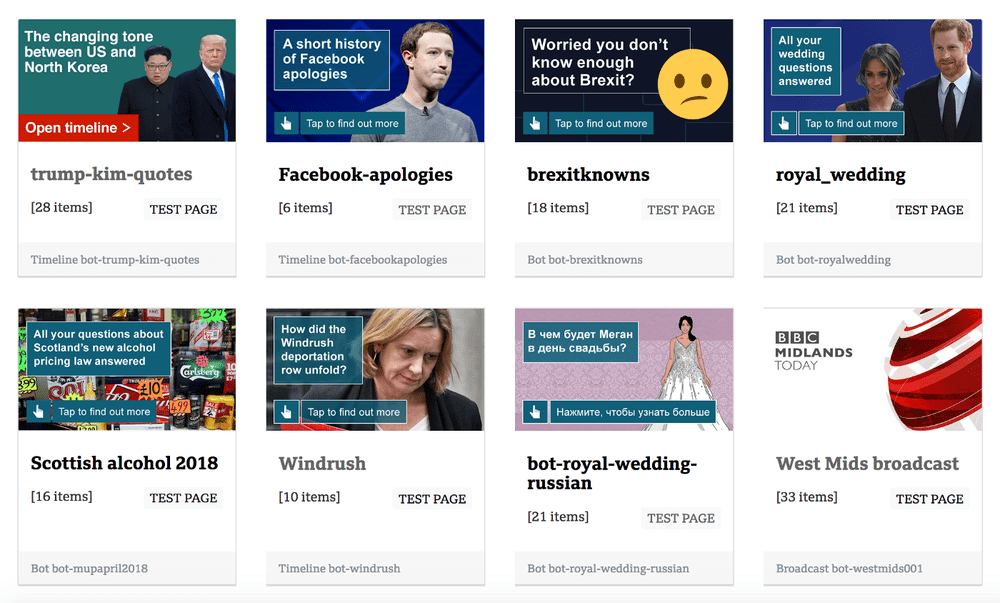 BotBuilder addresses two major problems that writers face when scripting user journeys for chatbots. Firstly, by making it simple for journalists to understand the connections between questions, it becomes simple to present a user with an easily understandable journey.

After atomising an article into questions and answers, BotBuilder provides multiple features to help journalists conceptualise how the material should fit together. Journalists can walk through a conversation using a forward/rewind mechanism, linking questions as they go. This lets them efficiently test conversational journeys, and ensure that our audiences’ most popular questions are answered first.

Secondly, BotBuilder makes it easy to prevent content from becoming out-of-date. Most bot-building tools aren’t suitable for journalists because they don’t make the conversation easy to search or fact-check. That means that when a story changes, the bot can share innacurate or misleading information.

Not only does BotBuilder make it eays to script conversations — it also makes it easy to fact-check and update the ones that are already online. The average bot in our pilot is embedded on five to six article pages — and our most popular appeared in 25. If a new development affects the scripted dialogue, editors need to be able to quickly find the out-of-date content and correct it. 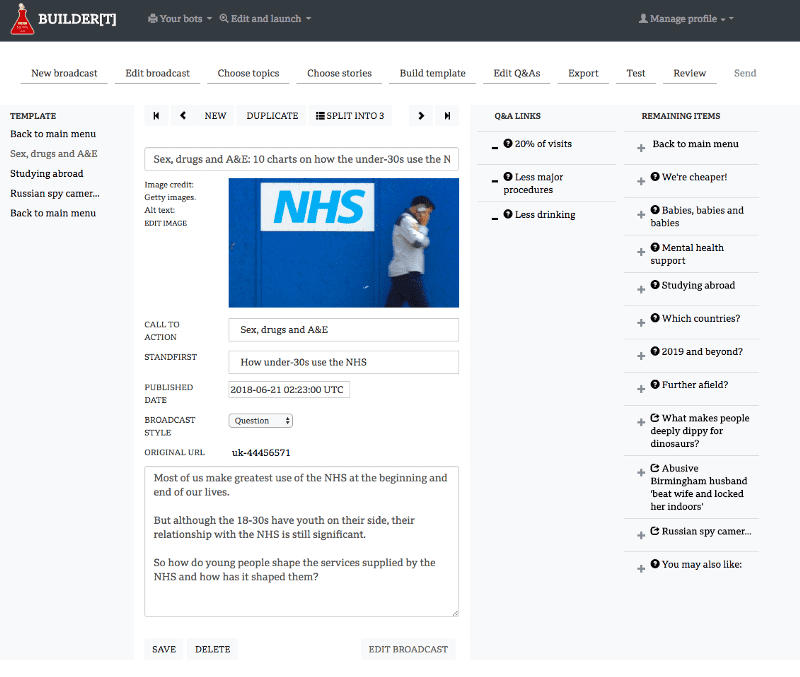 Along with solving big challenges around writing non-linear conversations, BotBuilder also boasts a collection of features that gently enforce best practices for bot scripting. The tool automatically adds messages that ask users whether they want to stop, start again, or provide feedback on the bot. And after launch, the bot’s author has access to analytics to identify and tweak poorly performing questions — places where users stop engaging with the bot.

The tool supports four different chatbot formats, thanks to a collaboration with the BBC’s Visual Journalism team. In addition to the standard question-and-answer model, it can also support timelines, reverse-chronological timelines, and “broadcast” mode for Facebook Messenger. 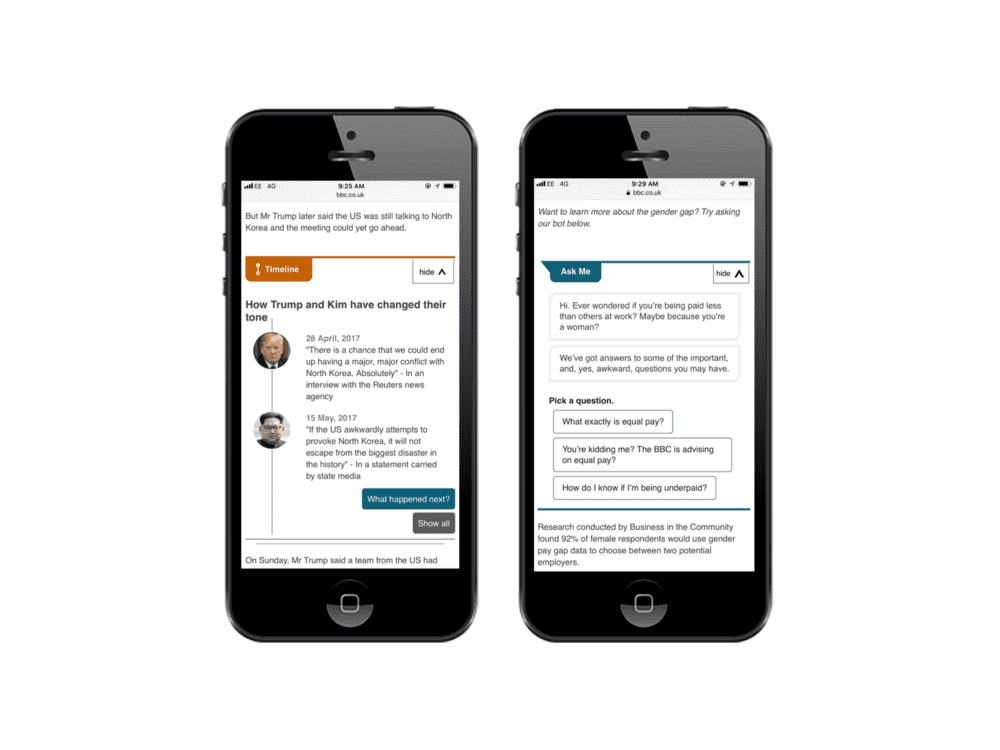 Next steps: BotBuilder and local news

While we initially developed BotBuilder to populate our in-article chatbots, we are now launching a pilot which will use the tool to serve up local news via Facebook Messenger. We built on the application’s original features to add an automated index of all articles published for a given region, which journalists can custom-curate for bot subscribers.

By using automation to pull together content featuring one region, editors can spend more time choosing the most appropriate material for local readers, ensuring that the BBC’s bots — on and off platform — deliver the same high-quality content that is expected of the corporation.

The BBC’s experiments with chatbots are driven by a desire to reach audiences who engage infrequently with our news content.

Our belief is that a less formal and more conversational style will be less off putting to younger readers, who are hungry for accurate, but accessible, news coverage.

From Brexit to the Oscars, our in-article chatbots have been used on the biggest stories of the year. Our most recent chatbot, giving background to the Royal Wedding, was embedded in 25 news articles on the BBC website and viewed in over three million browsers. In fact, it was so popular we even translated it into Russian. At least one in five readers who started a conversation asked the bot five or more questions — and more successful bots saw up to 50% of users reach that point.

None of this would have been possible without the BotBuilder, which has established a workable route for journalists to write in a totally new and unfamiliar style.