Roundup: Building the news for the next generation

As media organisations look to reach the next generation of users, how can they engage with young audiences whose news needs are sometimes lost in all of the noise?

The goal of our #newsHACK events is to bring together the brightest minds in the industry to experiment with disruptive technologies. We usually frame the challenge around these technologies — asking participants to find new ways for journalists to use speech-to-text algorithms, for example, or design approaches to delivering news via smart speakers.

At our most recent event, we gave participants 48 hours to prototype a news experience that would better meet the needs of young audiences. The urgency of reaching this demographic is often the driving cause of change at legacy media outlets in the first place. Preferences for algorithmic news selection, social media’s role in surfacing and sharing stories and the rising popularity of voice assistants are just a few of the challenges that need multi-disciplinary answers from media organisations — solutions that bring together thinking from across design, engineering and editorial.

We were thrilled to have 12 teams of journalists, engineers and designers from newsrooms across the UK pitch ideas about how we can begin to address the gap between traditional coverage and the under-35s. From “feel-good filters” to topic-based sticker collections, here’s a quick roundup of what they built.

To kick off the challenge, the BBC’s Markets and Audiences team and the Reuters Institute for the Study of Journalism presented insights on the latest news habits of our target audience. Teams were asked to prototype ideas that addressed these trends.

After two days of prototyping, winners were chosen in each of four categories:

We were joined by four judges from across the industry to evaluate the final presentations: Fiona Campbell, digital director of BBC News; Richard Fletcher, research fellow at the Reuters Institute for the Study of Journalism; Robin Houston, chief technical officer of the digital design agency Kiln; and Zing Tsjeng, the UK editor of Broadly, Vice.com’s women’s vertical. 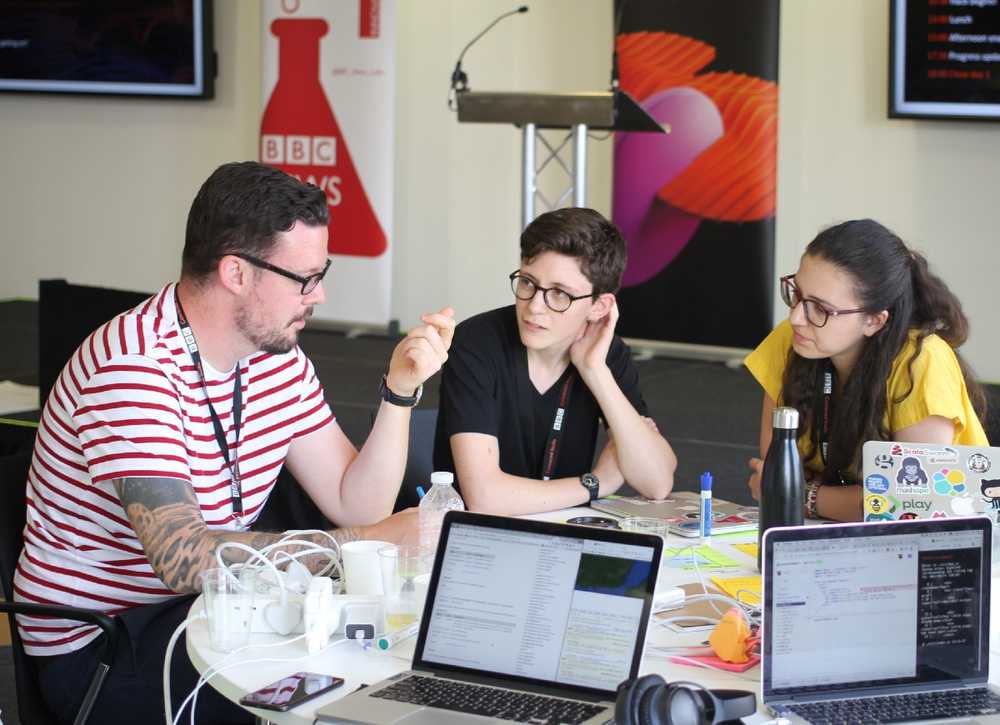 This team’s prototype rewards in-depth exploration of major news stories using a tried-and-tested incentive mechanism: stickers! The team designed an app that serves up personalised stories and “what you need to know” — the editorially curated content of the day. From individual articles, readers can navigate to topic pages that display key events, topics and people around a theme. These cards are only unlocked after users have read a story about them. A weekly sticker album tracking readers’ progress on the biggest stories helps give users a higher-level overview of their news consumption across a range of topics, gamifiying in-depth exploration to compliment the app’s “snackable” homepage for news grazers.

Judges’ comments: We love the sticker album element. Even if the World Cup wasn’t going on, it’s a really fun idea. 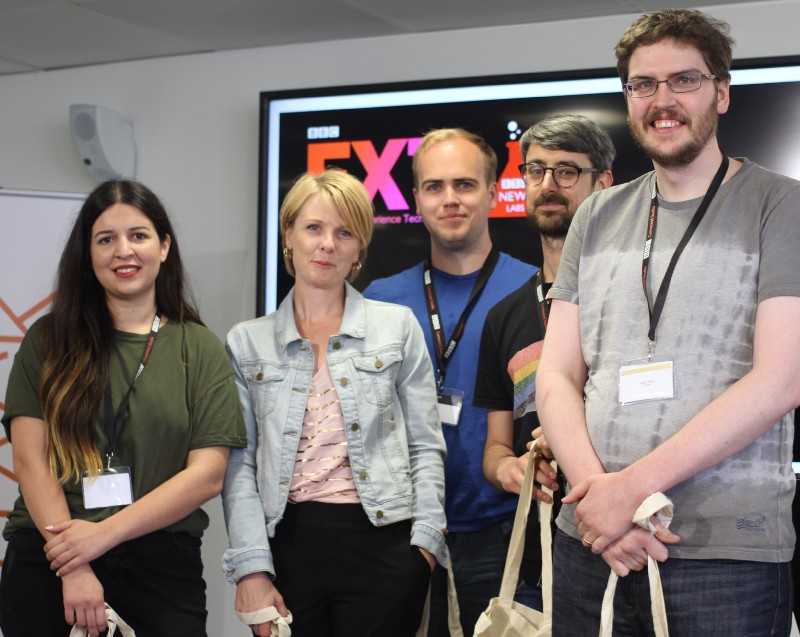 Shocked that a pan-BBC team can win a hack with a concept called News At Ten? (You’re not alone — so was Fiona Campbell). This team designed an interface that gives hosts control over broadcasts on Twitch, the live video streaming platform. The tool allows hosts to share tweets, Facebook posts and online articles with a show’s viewers. The News at Ten programme itself features a group of young “presenters” chatting about the day’s biggest headlines and answering live questions from audiences. According to the team, it would be the first instance of a major news organisation using the platform, which is most popularly known for its connection to the gaming world.

Judges’ comments: This idea has not been done before on Twitch, so it’s a new place to offer news-style content. The host curation felt very exciting. I think the [existing] ten o’clock news would absolutely die.

Most likely to drive participatory behaviour: The Sunday Times 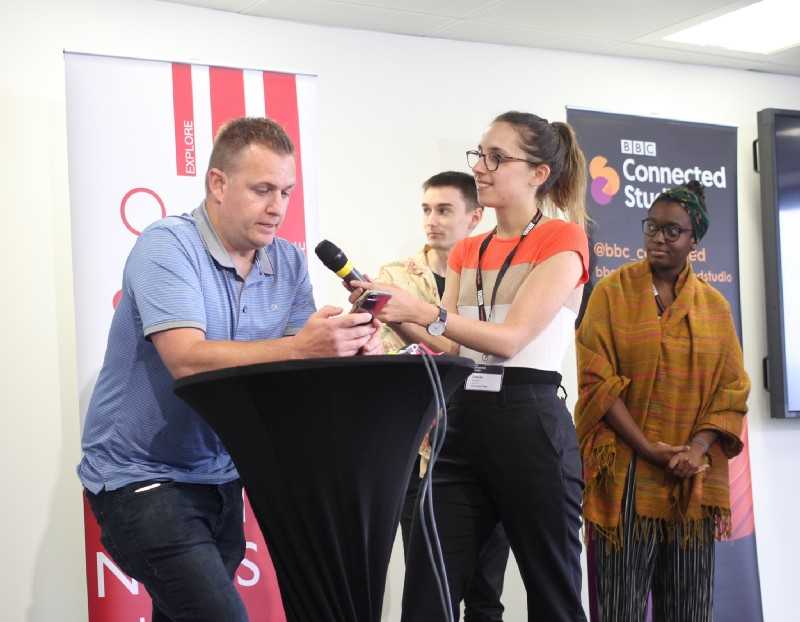 This team’s Heyyy chatbot for Facebook Messenger delivers the news in a way that feels natural. Users can ask the bot for the day’s big stories or for light-hearted content (in the demo, the team asked Heyyy for a “pup-date” 🐶). They can also invite the bot to challenge their views, serving up news that they might not seek out themselves. The bot learns about users’ preferences from the free text entries they use to either dismiss or request more information on stories. It’s also emoji-sensitive: it can deliver stories that match moods as well as topics.

Judges’ comments: The minute they announced this I immediately wanted to download it. It’s a really innovative way to speak to young people. Shout out to one of the only teams who made use of emojis. 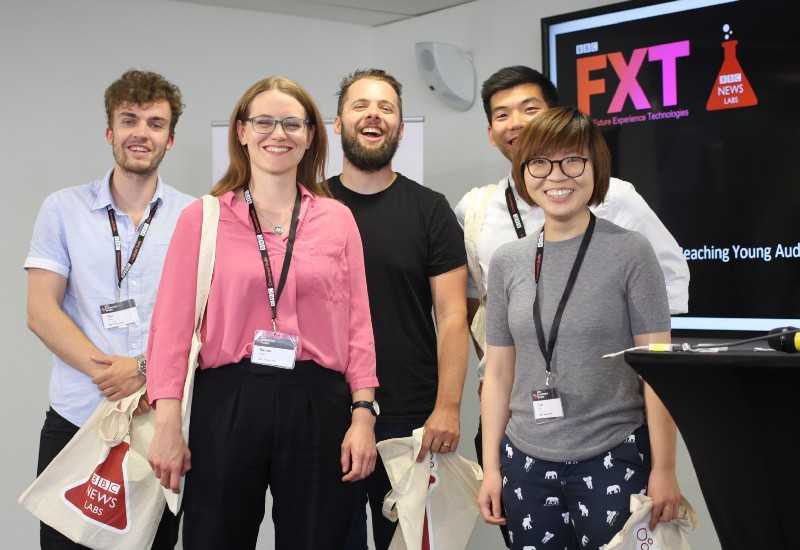 This group from the BBC’s News Labs and Audience Engagement teams pitched a solution for optimizing news organisations’ Instagram photos. They built an interface to Amazon’s Mechanical Turk API — a crowdsourcing platform for quick tasks requiring human intelligence. Editors can upload multiple photos to the interface and ask the micro-workers to choose the one that they think looks best. The data can be filtered by audience age, allowing editors to specifically target under-35s with their posts. The team suggested that while Mechanical Turk might not be suitable for news organisations, there’s nothing stopping them from setting up their own audience pool for testing images.

Judges’ comments: As soon as you hear it you think: why does this not already exist? It’s very achievable. We all thought it was fantastic idea. 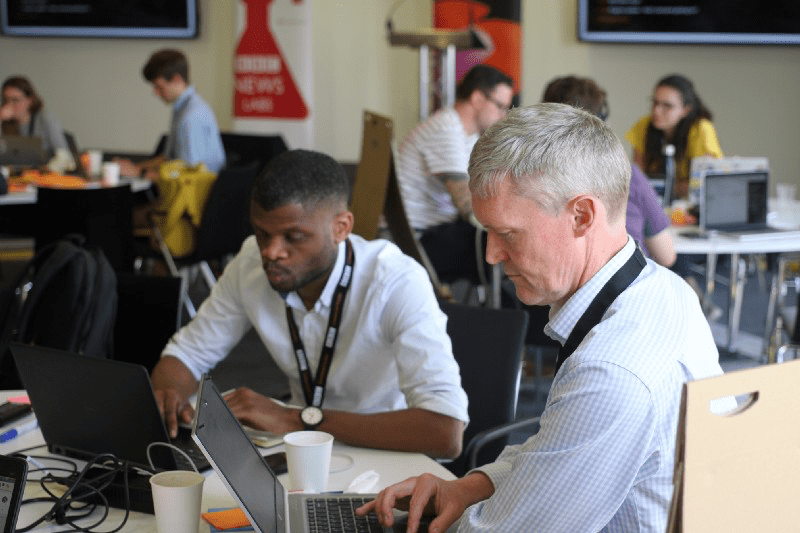 This team from Reach Plc Regionals designed a news experience that makes the most of their locally reported content: a progressive web app that helps readers maintain healthy levels of screen time. Its features include a clock icon that can be used to upvote stories that users felt were worth their time, an optional alert that notifies readers when they’ve spent too long in the app and a “feel-good filter” that only returns positive news stories. They also introduced health bars, which show readers what sort of content they’re consuming the most of. 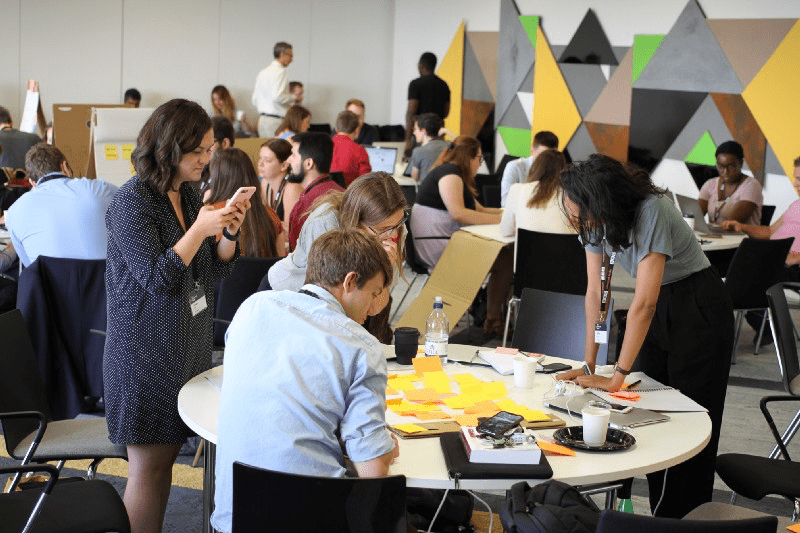 What if you could ask an algorithm for fast takes on big stories that matched your friends’ views? Cue Jude, a human-assisted algorithm for Facebook Messenger. This extension lets users search by topic and by tone to find relevant news to send to friends. You can search for satirical cartoons on the World Cup, uplifting videos on global warming or critical takes on Brexit proceedings. Like the Giphy extension for Messenger, Jude doesn’t require users to exit their personal chats to search for news; instead, it can be used as a tool from within a private conversation. 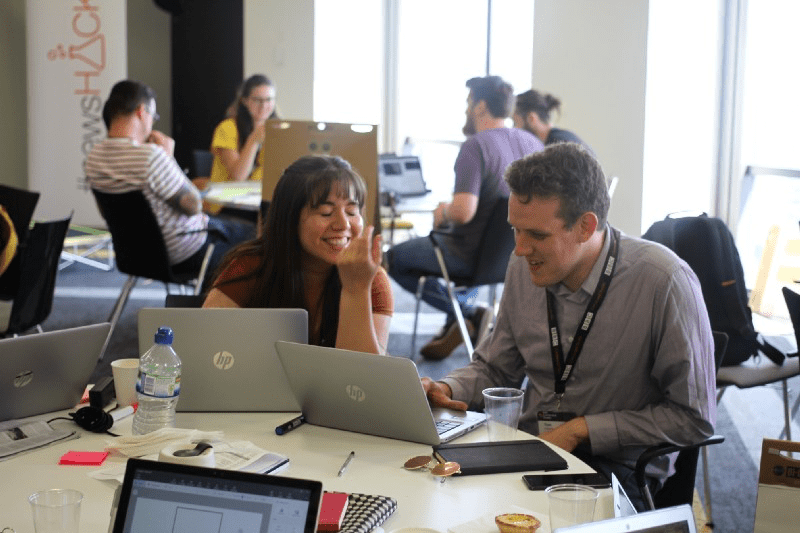 The team from the House of Commons demoed News Swipe, a Tinder-style app that allows users to choose the news stories that they’re most interested in. News Swipe brings together audio, video and text stories, simplyifying choice in an oversaturated app market. It features crowdsourced content from its audiences as well as professional reporting, and lets users record voice messages recommending the stories they read. Featured topics appear at the top of the interface and are generated by app users’ swiping habits. 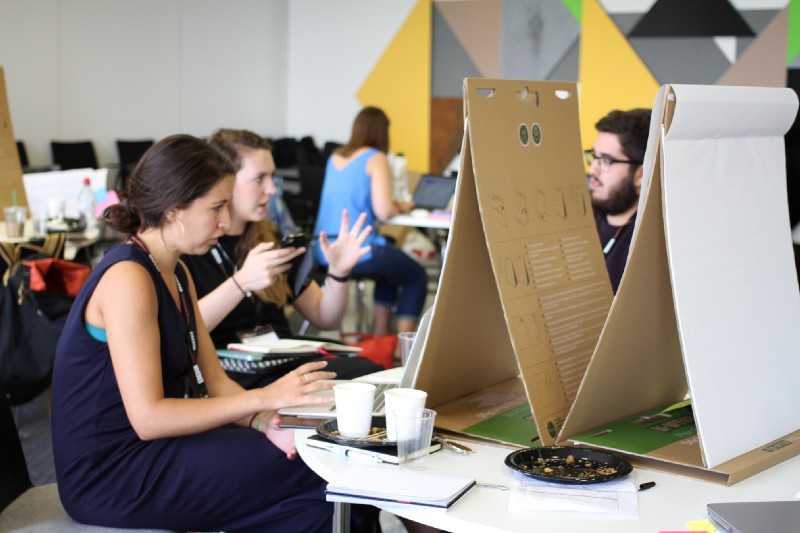 The team from Simple Politics designed News Flash, an app that shares visual explainers and opinion pieces with young audiences seeking out a range of views on the news. Users begin by choosing stories they’re interested in from a carousel. When they swipe down, they hit infographics and short-form explainers custom-created by the team at Simple Politics. One more swipe and users arrive at a collection of opinion articles, which help them explore different angles on a story. A profile page helps users track the content they’re engaging with, and a complimentary podcast explores popular and under-the-radar stories in more depth.

The Guardian Team One 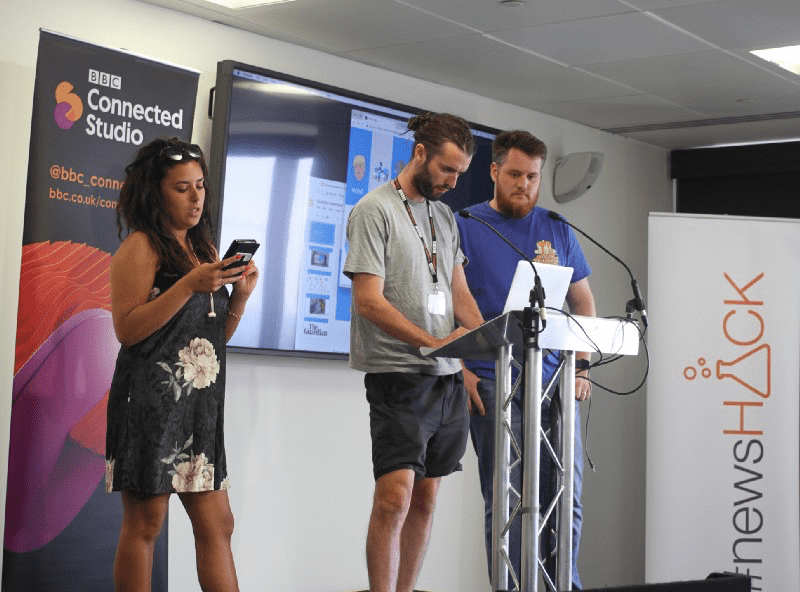 This team prototyped an app that gives geographical context to user-submitted video stories. Guardian Global surfaces relevant local news on its “world view” map — a globe which animates to reveal the location of stories that users swipe between. Submitted content would be fact-checked by a small team of verification experts. 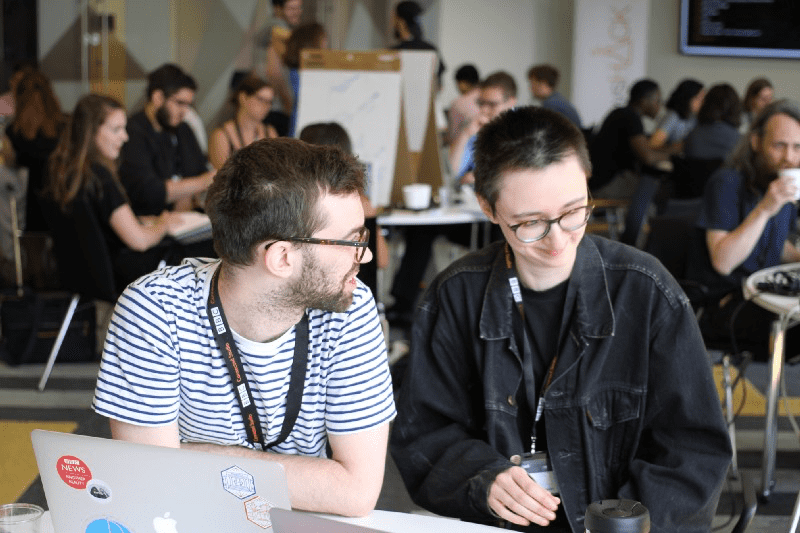 This team of data scientists, journalists and developers from the BBC designed What the What?, an app that surfaces bite-sized explainer content for major news stories. Citing the BBC’s existing experiments with short-form content, such as in-article chatbots, the team noted that it’s still impossible to surface these more digestible news nuggets through traditional search. What the What? gives it a visual treatment within a single app, empowering users to search for background on any news topic they want more context on. 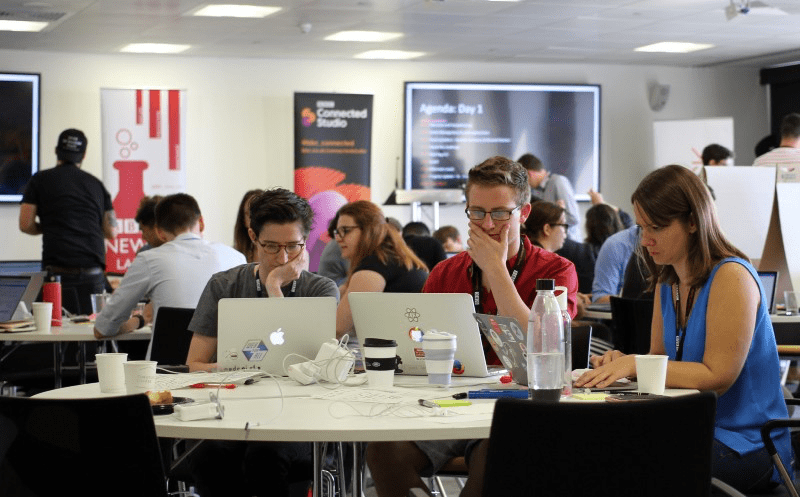 This pan-BBC team demoed 100 Words: a personalised package of stories that builds on the corporation’s recent experiments with AMP Stories. Users would be given a carousal of news featuring lead images and headlines. They could then swipe up to get more information — but instead of being taken straight to the full-length piece, they would first land on a stand-alone 100-word summary. The team also added interaction to the full-length piece, which can be accessed following the short article, that allows users to re-enter the carousal where they left off. 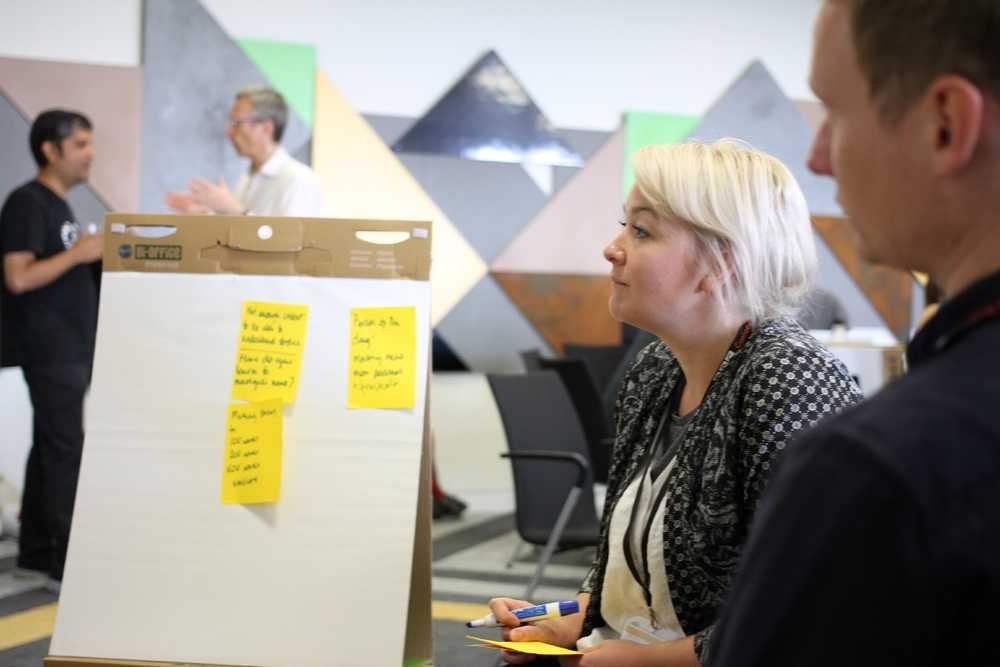 This pan-BBC team prototyped a new funnel for bringing users to BBC content. BBC InBrief is a campaign that shares short news summaries on popular social platforms. It takes the first four paragraphs of BBC news articles, which are custom-written as stand-alone pieces thanks to a CMS hangover from the days of teletext, and automatically creates tweet threads and WhatsApp messages sharing the most important facts in the story. The Twitter bot polls the BBC’s popular story API, and the WhatsApp messages contain links to full articles with unique tracking URLs —making it possible to track referrals from one of the most closed-door messaging apps for the first time.

A huge thank you goes out to all of our judges for volunteering their time, and taking the challenge as seriously as we do; to the lovely team from BBC Connected Studio for producing the event; to the team at Level 39 for hosting us. And of course, to all of our enthusiastic participants who make these events so rewarding.

We’re always looking to broaden the reach of our #newsHACK events and are interested in feedback that helps us make the hackathons more accessible. Whether it’s a pitch for a better topic, an idea for a new format or a request to be included in our events newsletter, please do get in touch. I’m at allison[dot]shultes[at]bbc.co.uk.