I’m not the same journalist I was a year ago.

If you had told me then that I would soon find myself doing a job that involved talking to a small cylinder all day, I probably wouldn’t have believed you. But here I am, surrounded by smart speakers. I’m getting on a first name basis with voice assistants like Alexa and Siri, learning all about voice technology and artificial intelligence.

Why? I’ve been working on a project to help better deliver BBC News via voice assistants. This is part of a wider Voice + AI project led by exec editor Mukul Devichand, to help the BBC operate in the best possible way as millions of people embrace this technology.

Everyday I ask questions like “If our audience could have a conversation with the BBC about what’s going on in the news, what would that be like?”. It’s a mixture of blue sky thinking, design sprints, workshops, audience testing, prototyping and swathes of post-it notes … all with a big dollop of fun on top.

I thought I’d share some observations from my journey so far.

“Alexa, give me BBC News”

The main project I have been involved in is the launch of a more interactive version of BBC News.

For now it’s available via Amazon Alexa: to hear it just say “Alexa, give me BBC News.” The listener can skip stories by saying next if they’ve heard enough, they can go back, pause, or ask for more information.

Fun behind-the-scenes fact for you, this product was originally given the (now legendary) nickname “Skippy” by the team at BBC News Labs because of the ability to skip through stories. Shout out to their brilliant software engineer, Lei He, who first started piloting Skippy back in 2017 and stayed with us in Voice + AI until recently to see it through.

In terms of structure, the service has two layers: main stories on top with deeper dives attached. And this is where it gets really interesting, when you ask for more information you get a richer piece of BBC content – think expert analysis or an exclusive interview. This is appealing because it would be pretty impossible to listen to all of the audio the BBC makes each day, so someone has done the work for you. Our research has shown that people don’t always want to or can’t interact because they’re busy doing something else, so we’ve designed the service to also suit someone who just wants a passive listen. Say nothing and you will just get the main stories.

News on a new platform

A team of journalists has been put together from within the main BBC newsroom to make the linear and interactive BBC News briefings. We know that people are using their smart speakers in their homes and so we have tried to adapt our tone and style to match this personal setting. We made a conscious decision to move away from broadcasting at people and try to use everyday natural language. 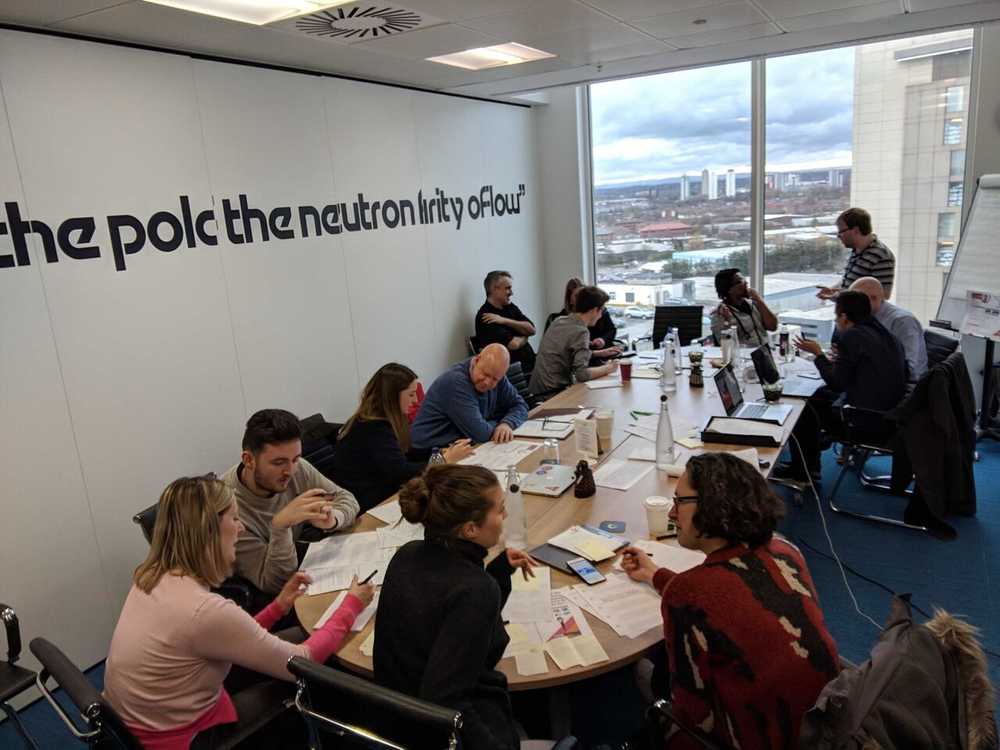 During an early round of user testing one person said that being able to control the experience made it feel like a personalised news bulletin with minimal effort. We were very happy with that, but we also know that this voice space is still in its infancy and we’ll continue to listen to audience feedback and innovate as we go.

Some key learnings so far:

I’ve really enjoyed the tales from our journalists about settling in to the new medium. In order not to be bad new neighbours they’ve been coming up with stealthy ways of listening back to their Voice content quietly. There’s the romantic technique, which involves hunching over the speaker murmuring sweet nothings to it and, what I like to call, the casino roller, where you hold the device up to your face and whisper at it as if blowing on dice for luck. They’ve also been dubbed by some in the Newsroom as “the team with the voice machine”. 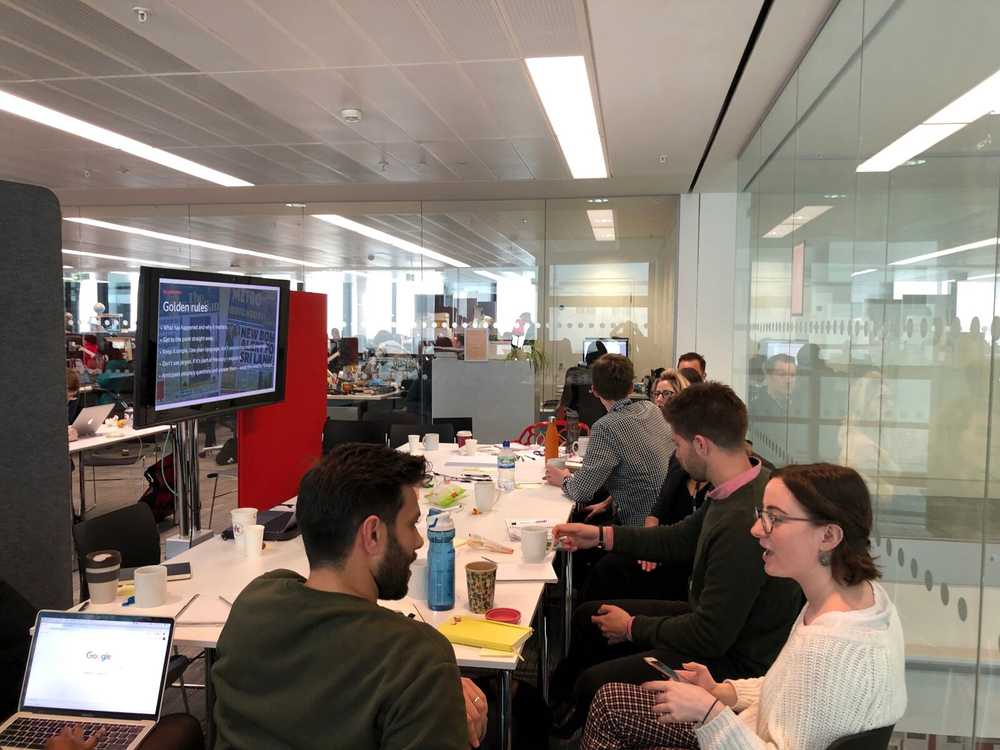 Discussing how to write for Voice platforms.

As a reporter I covered a lot of technology stories but I wasn’t prepared for all the acronyms and unfamiliar terms our design and engineering teams had up their sleeves. It was like arriving on a new planet and not speaking the language. I still get thrown sometimes. The other day I got an email invite to a spike workshop and accepted without being entirely sure what I was agreeing to. Nothing sinister as it turns out, a spike is a time-limited investigation into whether some software would work for us, and, after being mocked by our Voice journalists the other day for using the word ‘deck’ instead of ‘presentation’, I reckon I’m now almost fluent. 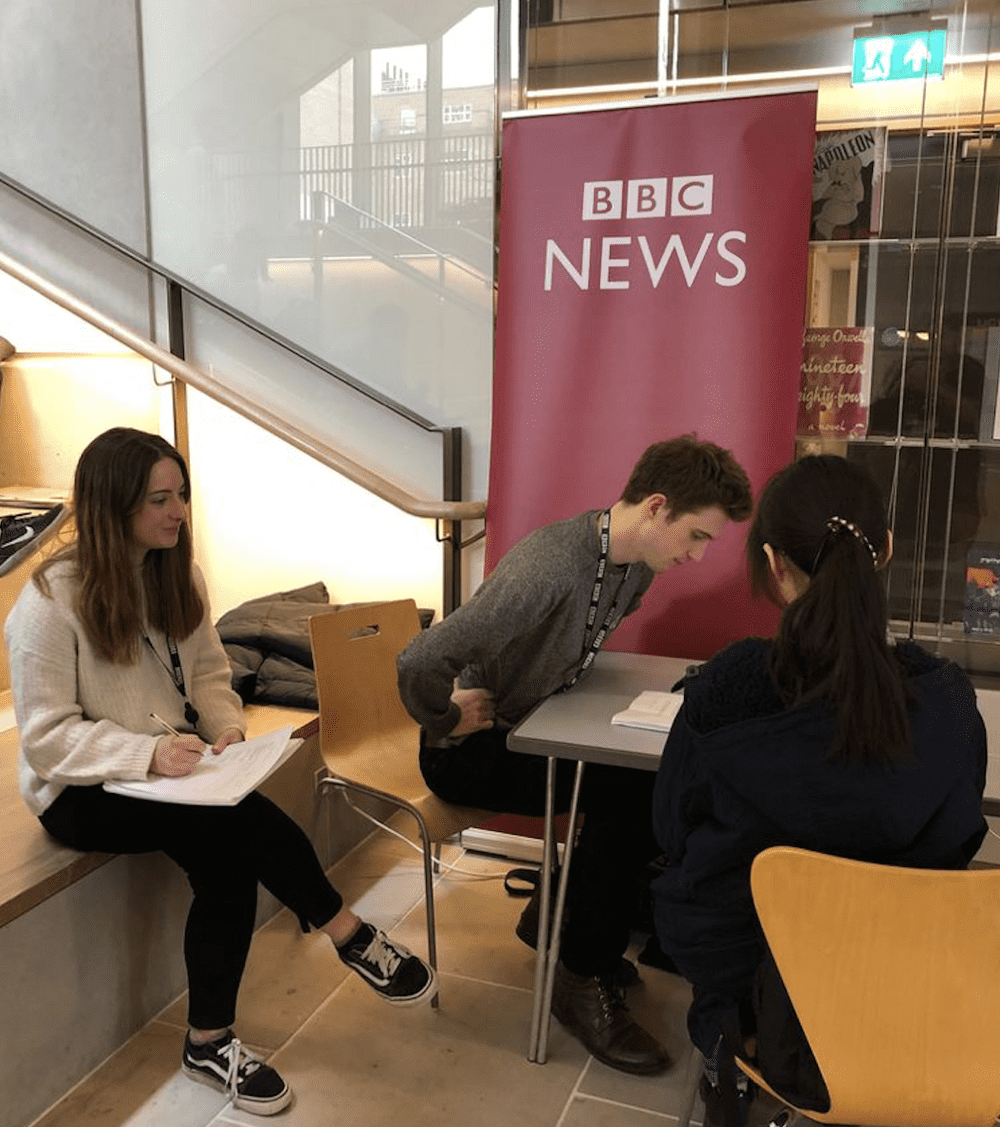 Perhaps the most cutting edge sign at the BBC? Made with a DIY sticker.

You’re a journalist right, what do you do?

A developer asked me this a few months ago about my role within BBC Voice + AI and it stayed with me because it’s actually something I’ve been asking myself in a broader sense - what does it mean to be a journalist in a world where AI Assistants are a point of access for our work? Are we all going to need to learn how to code in order to stay in work? Considering how both the internet and social media have rocked the way we communicate and consume media, it’s mind-boggling to consider the impact something like conversational AI might have on our lives in 10, 20 or even 50 years time.

I don’t have the answer to the question above. No one does. But I’ve decided not to worry about it. And in my humble opinion, neither should any journalists out there.

Being resilient is in our DNA. Whatever the tools or the platform - notebook, microphone, thumbs for breaking news on social media - we are all storytellers.