How the BBC is reinventing news for voice platforms

When it comes to news consumption, if the past decade was characterised by the dominance of mobile, then the next will arguably be shaped by the rise of voice technology.

Voice assistants - or rather the underlying AI that powers them - will undoubtedly change how people get their news, what they expect of it, and what they want from providers like the BBC.

Given the breakneck speed with which the market is developing, it makes sense for public service broadcasters to take voice seriously.

Here is what we know

In light of these shifts, the BBC and other news providers have been experimenting with voice, not only to help shape this new technology but to understand how it could fundamentally change how our journalism is distributed, discovered and consumed.

To this end, we have been publishing some news content to third-party voice platforms: Since 2016 the BBC has been the default news provider in the UK on Amazon Alexa, Google Assistant and Apple’s Siri, which means if you ask “What’s the news?” you get the BBC.

In the last 12 months, we’ve served tens of millions of news bulletins.

But that’s just linear audio. It still represents the one-to-many model of media distribution that you might get with traditional TV or radio.

What happens when audiences can talk back?

Late last year our BBC Voice + AI team launched an interactive news service. The move was a first step in reinventing news for voice platforms, and the first of its kind in the UK.

The service is a 24/7 operation that’s only available on Amazon Alexa (for now). It’s created and curated by a talented team of “Voice News” journalists based in the heart of BBC News HQ in London.

To open the experience just say “Alexa, give me BBC News”. You can move between stories with simple commands like “next” and “back”. Crucially you can ask for more information on selected stories to get genuine journalistic depth. 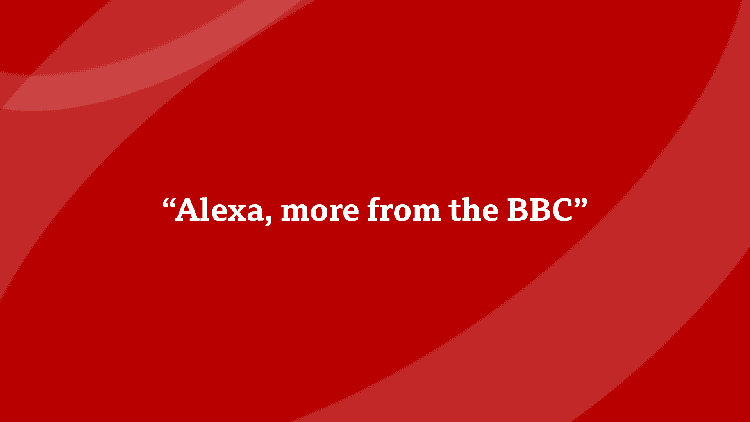 In a world of soundbites, the deeper dive functionality means BBC journalists no longer have to forsake detail for brevity. By saying “Alexa, more from the BBC”, audiences can access the best BBC journalism on a given story. Our reporters can explain the significance of events and give the colour, context and background we know audiences value. We offer, for example:

We took a modular approach, constructing bulletins from single-story audio files, which enables people to navigate the experience using only their voice. 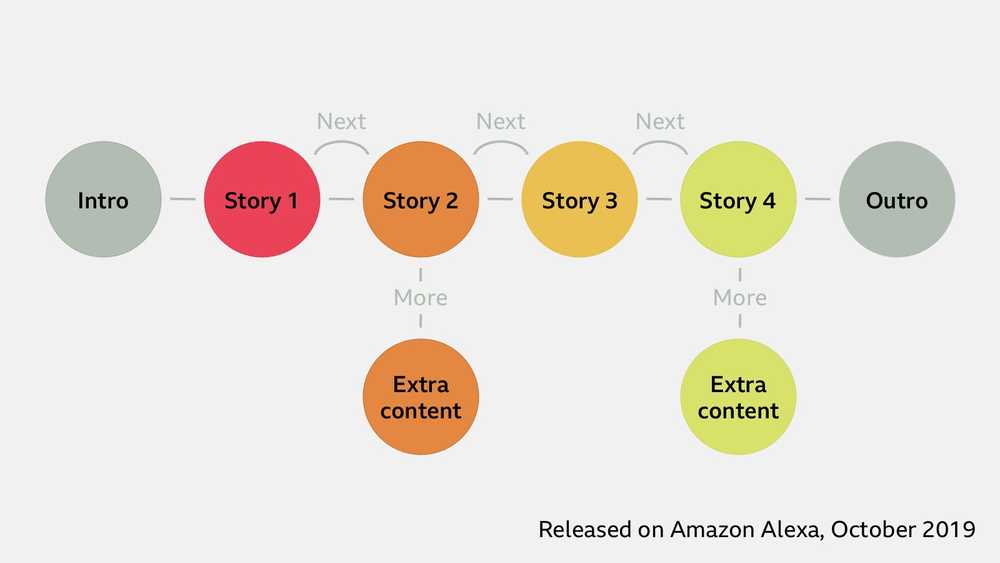 The tone aims to be conversational, a less formal style of delivery that our audiences have told us feels more native to voice.

In terms of the content itself, we’re trying to address head-on some of the pain points that we know young audiences in particular have when it comes to news. With the deeper-dive function we have the luxury of time to explain the significance of events and to give the context we know audiences value.

I use "more" on stories that are weird and full of facts, or tell me the history or background of events. I find it really interesting and different to what is out there at the moment. - Audience testing

This is the very first step in a long-term evolution of the product, and we’ll be using audience research and direct feedback to help us iterate and improve the service along the way.

So far I’d say there have been three main challenges, which will be familiar to anyone already involved in voice and conversational design.

Make sure people know who they are listening to

Our journalists intro every bulletin with “Welcome to BBC News” but because voice relies on more than words, we’ve invested in creating a new sonic identity for BBC News on voice platforms. It’s essential to establishing your brand and maintaining attribution, especially in an audio-only environment.

Voice’s Nathan Freeman, responsible for the network sound of BBC 6 Music and 1Xtra, worked closely with composer David Lowe, who was behind the original BBC News TV sonic branding, to reimagine the music bed for a new platform and new era.

You have to explain how certain features work

The “onboarding message” is the first thing users hear. It’s necessary to explain in the simplest way possible the value of the service and how it works.

Although as journalists we believe that content is king, in the voice world messaging and prompts - the commands and questions you ask to help move things along - are a crucial part of the experience. They take a lot of time to craft.

Another user experience (UX) challenge we’ve discovered since launch is people struggling to access the deeper dive content. Amazon’s technical constraints mean you have to say a very specific phrase, which doesn't exactly trip off the tongue: “Alexa, ask the BBC for more”.

For now, we’re telling people what content they’ll get, how long it lasts and then repeating the phrase verbatim so people don’t have to remember it.

There are more than 100,000 skills on Amazon Alexa alone, and yet these devices tend to have very limited use cases - play the radio or music, get the news and weather, ask a question or get Alexa to make fart noises(!)

As part of a broad campaign to raise awareness, we’ve started running radio, TV and web trails (such as the BBC Radio 2 example below) encouraging people to give interactive news a go.

Audience research: You have to really understand how people are interacting with their devices. It’s crucial to remember you are not the audience. People have different mental models and different goals, which is why you need to test early and often. It puts your product under the microscope, helping to uncover usability issues at every stage of development.

It takes all skills

Multi-disciplinary teamwork is key: This is essential. Editorial, UX, Product, Engineering, Marketing & Audiences working together, sharing expertise from across the disciplines. I’d like to see this become the new normal for newsroom innovation.

BBC News has always defined itself not by the platform but by its purpose - to inform. It’s important that wherever our audiences are, they have access to news and information they know they can trust.

What’s exciting about voice as a platform is that unlike traditional channels, such as radio, we’ll learn about individual’s interests and preferences through better data and through two-way relationships. Our audiences will be able to ask us for the information and services they want and need, and we in turn will have the ability to create better, more personalised experiences.

As a society we’re moving towards a world of hyper-personalisation, outsourcing ever more decision-making to algorithms. As a public service broadcaster, fairness, due impartiality and transparency are core to the BBC’s current thinking on recommendation engines and personalisation. As part of the development of news services on voice controlled devices, we’re collaborating with colleagues across the organisation (and externally) to try to find answers to some seriously complex questions like how we might shape algorithms designed to promote critical thinking rather than reinforce filter bubbles, replace time-wasting with education, and allay public concerns over privacy.

Voice and AI-driven services will have deep and long-lasting consequences. By getting involved now, news organisations have a rare opportunity to exert some influence over how this medium develops, keeping audiences front and centre.