What's easier to understand? An article, or a series of short explanations delivered over several days?

Are you confident you understand climate change and its impact on the world? Could you explain it to a friend?

These are the kinds of questions we ask ourselves at BBC News Labs.

In 2019 the BBC Science & Environment team wanted to ramp up its climate change coverage. Labber Grant Heinrich worked with Anna Doble of World Service and Dulcie Lee from the UK newsdesk to build a chatbot that talks you through the topic in all its complexity.

For this project, we approached the Climate Bot as an editorial experiment, not a test of whether audiences like bots as a format to deliver news. (That’s something Labs had already tested in earlier experiments.)

Instead, we wanted to know if there was a more effective way to explain a topic than the traditional long article format. Website stats tell us that some readers tend to lose interest well before the end of long articles.

So the Climate Bot tested: is it easier to understand climate change by breaking our explanation into several chats, giving users a break between sessions, and tightly packaging the information they needed in a super efficient journey?

We built the bot from tools we've used before: Facebook's Messenger platform for delivery and commercial bot-building software, Dexter, to manage conversations. 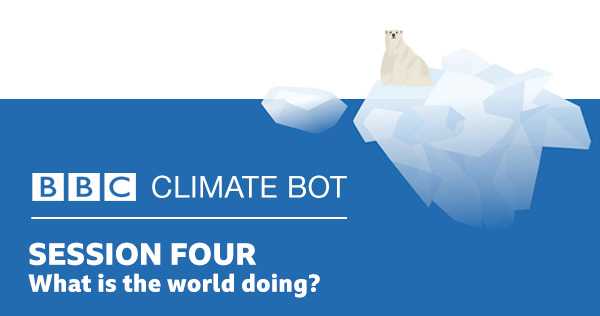 Each session addressed a different topic within climate change

Would users be more likely to complete a series of interactions if we spread them across multiple sessions, with a days break between each?

We restricted the bot to the absolute minimum a person needs to know to confidently understand the basics - but didn’t shy away from the complexities of the science and the world’s political response. A bare bones approach, we hoped, would let us focus the daily interaction, and let us test: would it help the user understand one new topic a day?

In a perfect world, if you didn't understand something, you'd know an expert to call and ask: "What does this mean?" Before explaining, the expert would gauge how much you know about a topic already, and tweak their explanation so it makes sense to you, and your life experience. The Climate Bot used reflection to make the user part of the conversation, asking how the users feel and thinks about climate change. Would that encourage the user to complete their conversation with the bot?

Conversation has pauses, jokes, and checks the other person is paying attention - the article format does not. Thanks to its excellent writer Dulcie Lee, the Climate Bot was conceptualised as a trustworthy, measured, and occasionally emotional (for example 😆) conversationalist that genuinely cared whether its counterpart was paying attention.

We didn't formally test if this improved completion rates. But now we've had some practice writing bots this way, we plan to experiment with this style of writing in future.

The final version of the Climate Bot spoke to each user for six days in total. An initial set of messages explained how the bot worked, asked users to subscribe, and asked for a sense of how personally concerned the user was with climate change.

Was the drip campaign successful? It raised further questions about how to measure the value of deep engagement versus wide reach. As users had to subscribe to get the daily updates, not every user who saw the bot opted to hear more. And within that subset of subscribed users, individual users were able to ignore a day's sendout if they didn't find a topic interesting.

That meant overall reach was reduced. But where users engaged, they tended to finish that day's conversational journey of 6-8 clicks. We were able to increase the start and completion rate by tweaking the copy to optimise message length, journey, and tone.

The big surprise with the bot, though, was that it proved to be an excellent listener. More than half the bot subscribers asked at least one follow-up question. The majority of questions were high quality, genuine requests, with little of the abuse you'd get with the same request on a social network.

It's not easy for media companies to listen to their audiences at scale, so there seems to be significant value in using bots to present a "guided journey followed by a request for feedback".

Want to try it out? 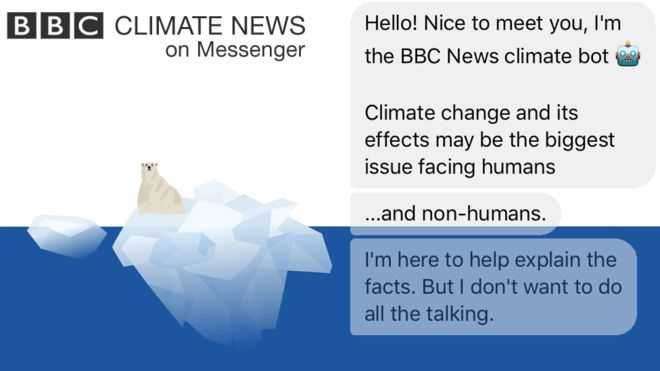 You can talk to the bot on the BBC News Messenger account here, or read more about it on the BBC website.