Can we combine one of the BBC’s greatest assets, world leading live output from linear broadcasting, with a modern digital approach focusing on personalised experiences and mobile devices?

Audience viewing habits for the BBC and others, are moving away from televisions and increasingly towards phones and laptops. This has led to an increase in the popularity of quick, customised, easily consumable content.

We wanted to investigate if we could alert our audiences to such output, live as it is broadcast as well as highlights and moments from previous output. This would mean we could bring relevant content directly to our audience rather than relying on them having to discover it for themselves. The hope is that we could make the most of the BBC's ability to deliver high quality live broadcasting but in a more contemporary way.

What are Live Segment Notifications?

In BBC News, TV & radio, programmes are planned and organised using running orders. These running orders are broken down into stories that correlate to sections of a given programme. This defined structure is particularly clear in programmes such as Newsnight or The Andrew Marr Show. For example, an interview with the health secretary about the NHS.

Live Segment Notifications would involve a member of the production team marking a story as high interest and therefore suitable for a notification when creating a running order. These stories would be picked up by the prototype and a notification to the audience could be scheduled and delivered. A further development would allow individuals to subscribe to topics they have an interest in and would want to be notified about.

How would notifications be delivered?

There are a range of delivery methods available to send notifications to an audience. For the initial prototype they were sent to a BBC Twitter account. 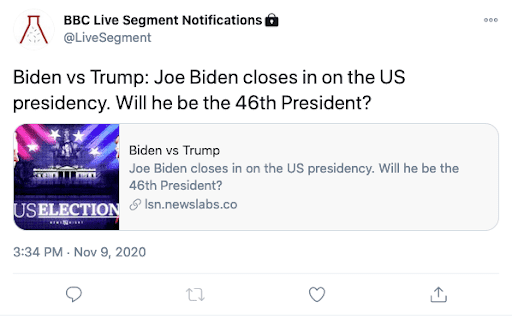 The notifications could contain information about the piece of content and a link to view the story. The point in time the user clicks the link would determine what they are shown. If clicked before the story is broadcast, the user would be taken to a live stream of the programme and could watch the story from there. However, if they click the notification after the story has aired, they will be shown a catch-up player starting from the story in question.

Where are we up to?

Currently we have an early prototype to test this concept. Running orders are compiled and stored, notifications can be managed and sent to Twitter automatically or through an internal dashboard, and users can be taken to a webpage where they will be shown the story content in a media player.

However, there is still plenty that we would like to do: